Our hero has seen some stuff since he escaped from Castle Wolfenstein.

Gamers may argue over who was the first to do a 3D first-person shooter, but no one denies that Wolfenstein 3D was a historic experience. Made back in 1992 by a little company called Id Software, it set the tone of the FPS for years to come and can still be purchased today. But in the time since, the rest of the industry has caught up and passed it in nearly every way. To do an FPS now means competing against multi-billion dollar companies using hundreds of people working around the world. So, how does Wolfenstein 3D’s legacy survive into the modern era?

They’ve already tried twice now, with Return to Castle Wolfenstein in 2002 and Wolfenstein in 2009, the latter of which the franchise’s current owner Bethesda does not recognize as canon and declines to distribute. This is not a minor grievance, since The New Order is a direct sequel and reintroduces three characters and their backstories. Until Bethesda changes its mind, we’re missing a pretty big puzzle piece of a story-driven game.

And it’s a pretty good story, too. It begins in 1946, in an alternate World War II where the Nazis are winning, thanks to inexplicably advanced technology. Part of the game is about figuring out where their edge came from, but the bulk of it is just fighting the global war machine that they have become by 1960. That jump in time is thanks to a certain incident involving our hero B.J Blazkowicz. He eventually returns with a vengeance, though you’ll probably be scratching your head over how it was possible, considering the nature of his absence. The game provides no answers.

There are a few Big Dumb Action Movie plot holes like this that are difficult to ignore, given how story-driven the game is. But the characters of The New Order are generally well-rounded, with convincing dialog and voice acting. While the 1992 original was a shooting gallery with a general theme, The New Order has a cinematic narrative, complete with love interests, plot twists, and dramatic tragedy.

Most of it is played out using in-game cutscenes, but you can also explore the different areas of the game for newspaper clippings, overheard conversations, and other bits that add layers of detail to this eerie and unsettling alternate Earth. This fleshes out the world’s alternate history, but it’s also that much more jarring when parts of the plot don’t slide neatly together. Still, the developer provides a better story than we’ve come to expect from an FPS. MachineGames may be a new name, but many of the team members come from Starbreeze Studios and worked on the Chronicles of Riddick games.

As you might expect, then, our friends know a few things about gunplay and explosions. The action in Riddick should be familiar to anyone who’s picked up a shooter in the last five years, with partially regenerating health, checkpoint saves, health packs, iron sights, and collectibles. MachineGames mixes it up by compelling you to kill a Nazi commander first, who will call in reinforcements until you eliminate him. You can stealth around to a certain degree and take alternate routes for better vantage points. There’s a perk system that rewards you with things like extra grenades or faster weapon reload times, tailored to your play style. And there are a few weapon upgrades scattered around, sometimes hidden in secret spots. The scenery and enemy types evolve at a good pace, as well. The firefights feel pretty conventional at first, but there are enough tweaks here to elevate it above mindless shooting.

It would be nice if the enemies were more observant of each other, though. Too often, I was able to dismantle the opposition by sniping the commander with a silenced pistol, before he’d alerted anyone. No one seemed alarmed by his slumping corpse, allowing me to ninja my way from one enemy to another with a mixture of silenced shots and knife kills. (Non-lethal combat is absent, but killing Nazis usually doesn’t trigger moral quandaries, anyway.) There’s no multiplayer in The New Order to balance things out in the enemy-smarts department, but its absence allows the developer to devote more time and energy to the single-player experience. 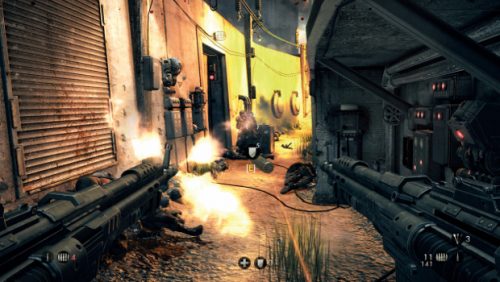 He can dual-wield a variety of weapons, almost all of which have an alt-fire mode.

Also, when the game doesn’t give you the option for stealth, it can get really hairy. A few times, you’ll be dealing with multiple waves, with no checkpoint in sight. The game doesn’t allow quicksaves (nor does it use Steam’s cloud save system, nor could we detect the location of the save files themselves), so you’re at the mercy of MachineGame’s difficulty curve, which gets pretty steep in the last act of the story.

Speaking of architecture, The New Order is a pretty good-looking game. Textures are detailed, people animate and speak convincingly, the color palette is varied, and MachineGames appears to have fun with the world’s retro-futuristic technology. Your graphical options aren’t explained very well in the settings menu, but you can at least tweak your field of view, which is important for gamers who tend to get nauseated when playing a shooter. Bethesda has strongly recommended a CPU with eight processing threads, but we didn’t experience a material difference when we disabled Hyperthreading on our 4770K or 3770K. With a stock GeForce GTX 780 Ti and all game effects maxed out, we got about 55 frames per second in the opening sequence at 2560×1600, regardless of CPU status. You can apparently disable or lower some settings without much visual impact, like shadow resolution and depth-of-field.

Frankly, our expectations for this game were not high. It’s pretty rare that new life is breathed into something that’s been around for so long. The trailers were long on story but short on action. The studio was new and didn’t have much clout, despite the pedigree of some individual members. And we did find a few things in the game that we wish had been done differently. But overall, MachineGames delivered the best Wolfenstein yet, and it is a welcome addition to our shooter library.