When Resident Evil evolved from the fixed perspectives and pre-rendered backdrops of old into the third-person shooter it is today, there were fans who shed a tear for the passing of the Old Ways. Never mind that Resident Evil 4 was widely acclaimed as one of the best games ever made. For some people, it just wasn’t Resi anymore.

If you’re one of them, Resident Evil: The Mercenaries 3D won’t be of the slightest interest to you. It’s ‘new’ Resi stripped down to its action-based core and chopped into bite-size chunks.

If, on the other hand, you thought the onslaught in the village was the best bit of Resident Evil 4, you’re going to have a fantastic time with this. Mercenaries is essentially that scene repeated over and over, the locations sometimes changing but the gameplay unvarying and unapologetically identical throughout.

t’s based on the bonus mode that first cropped up in Resi 4 and was expanded to include co-op play in Resi 5. You’re dropped into a small level – one of eight in total, all taken from the aforementioned games – and given a few minutes to rack up points by killing an endless supply of zombies and other creeps. If you fail to survive until the end, you get nothing. Otherwise, you’re awarded a score total and a grade from a lowly D all the way up – as far as we’ve managed – to SS rank. 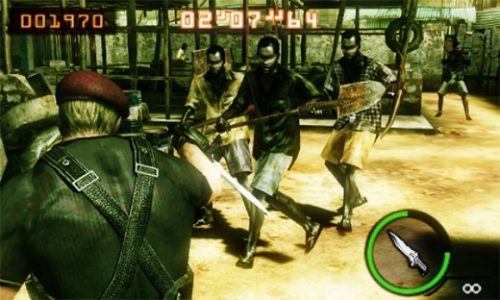 At first glance that’s as far as the game goes. You’ll play the same levels many times, with different lighting and a different choice of characters. You’ll follow the same routes, do the same things and fight the same enemies. But it doesn’t feel as monotonous as it sounds.

The locations don’t really matter – you’ll rarely notice the scenery. It’s all about a brutal, visceral form of combat that expands and grows in parallel with your own abilities. At first you’ll be happy to last as long as the regulation time limit, and you’ll do a lot of running away to make it that far.

Eventually you’ll learn the tricks that let you stretch out the timer and maximise your scoring potential, and instead of worrying whether you’ll make it to the finish you’ll be actively hunting enemies to preserve your combo counter. In Mercenaries the combo is the number of opponents you’ve taken out in quick succession. If you go for a few seconds without making a kill, it starts to flash and eventually vanishes, resetting back to zero. Needless to say you score far more points with a 20+ combo than you do with no combo at all.

Approach Mercenaries as a shooter and the best you can hope for is 30 seconds of carnage followed by a minute and a half of fleeing in cowardly terror. The choice of weapons is probably the first thing you’ll consider when picking a character, but ammo is absurdly limited. Guns capable of producing the splattery headshot effect we loved in Resi 4 come with enough bullets to take out maybe half a dozen zombies at best.

The trick is to follow carefully placed shots with melee attacks. You can only strike an enemy when he’s been hurt by a bullet, so the super effective tactic we’ve settled on is to pop him in the kneecap and smack him in the face while he’s doubled up in pain. Although it runs contrary to our baser instincts – this game does awesome headshots – we’ve learned to play it like this because we were having so little success otherwise.

Conserving ammo this way gives Mercenaries a rather different complexion. Most beneficially, playing melee style adds five seconds to the clock for every zombie you waste. In periods of intense action, you can actually make the time limit increase. Plus you can earn perks that electrify and stagger nearby enemies, allowing you to chain together epic beatdowns. It’s such an important gameplay factor that the gunplay takes a back seat. Shooting to kill not only wastes bullets, it costs you time.

There are eight characters to play as, each with a different equipment loadout. Jill Valentine has a knife, enabling her to attack when ammo for her shotgun and machine gun has run out, while Jack Krauser has a bow that comes with infinite ammo but takes a while to charge up.
Rebecca Chambers has just two weapons – a machine gun and a grenade launcher – but makes up for it by bringing five times as many health packs as the others.

If you play Mercenaries the way we’ve been playing it, she’s probably the character of choice, at least until you become sufficiently skilful to avoid taking quite so much damage. There are also 30 different special abilities, of which you can equip any three. Most of these perks have subtle effects, such as improving the handling of a weapon or giving you a better chance of a critical hit.

Several increase your vitality, and there’s even one that awards a bonus every time you kill an enemy while the last digit on the clock is a seven. Talk about specific… Perks can be levelled up in three stages, boosting the power of the effect or unlocking something to benefit your co-op partner.

Playing with a friend gives you access to an extra set of team melee moves, as well as doubling your firepower. You can taunt zombies to enrage them, then whistle for your partner and drop an extra humiliating move on your shambling victim. There’s a perk for making the most of that tactic, too.

The game is divided into five increasingly difficult sets, with levels repeated across them. The first couple of sets are just for training purposes, and the third ends with a boss battle that’s a total change of pace from the rest. At the end of the fourth set you get a different sort of challenge, with a much longer time limit and waves of various types of enemies.

Punching zombies for an extra few seconds isn’t such a critical skill in this stage, as you earn an additional few minutes for every wave you complete. It gets extremely tough, and some waves feature multiple chainsaw-wielding mini-bosses. No matter how many waves you’ve seen off, getting killed means an instant Game Over and zero points, so it’s a proper challenge.

We wish Capcom had done this sort of thing a few more times, because every other level, apart from the training ones, is the same. Not that repetition is a crippling flaw in Mercenaries – in fact it’s almost a necessity, since you’re trying hone a performance to perfection. We find it telling that the parts we remember the best are the only ones that alter the formula.

This game’s a high score challenge, first, foremost and almost exclusively. Upgrading all the perks requires a lot of staying power, and there are unlockable medals to commemorate various gameplay milestones, but the part you’ll always be most interested in seeing is the score at the conclusion of a round.

To that end, it’s strange that the high score tables are so limited. All you get is a single top score for each level and a grade for every character you’ve completed it with. It would be nice to know, after finishing Old Castle for the 20th time and not getting a new high score, whether we’d posted a performance worthy of the top three, top five or whatever. Hardly a deal-breaker, but still – an oversight. 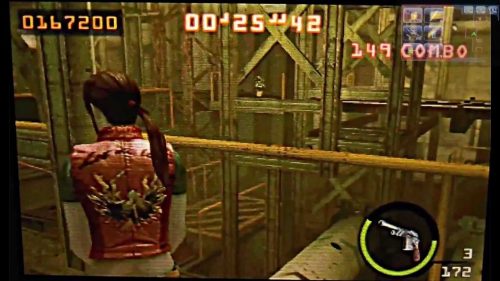 In being a relatively short game you’re supposed to keep replaying, Mercs follows the trend set by Pilotwings Resort and Steel Diver, both of which we’ve criticised for their brevity. However, there’s a lot more content here. Like a great fighting game or shmup, Mercenaries has depth that you’re not going to appreciate until you’ve gone through it again and again.

It’s not just about the unlockables – it’s about developing a combat style, alone or in co-op mode, and refining it until you’re acing every level and itching for the next encounter with the chainsaw horrors you used to run from. Eventually you’ll have exhausted its potential, but until that moment it’s the most exciting, heart-pounding game on 3DS. Mercenaries is considerably more than just a bonus mode.

Really hard to put down, even though it makes our palms all sweaty and gives us horrible dreams about chainsaw men. You've got to play this - it's great. Format Nintendo 3DS Developer Unknown Publisher Unknown Genre Action, Survival Horror, Shoot 'em Up