Soundbar With Most Boom Per Buck
Speakers Reviews

Our editors spent many hours researching and testing items to find and tell you about the best products.

I admit it: The Yamaha YSP-2200 soundbar I love is pretty expensive for the casual movie watcher. A more appropriate amount to spend on a soundbar is between $200 and $500 because it makes no sense to have a soundbar that costs more than a nice new TV. After reading a few dozen reviews the choice hasn’t been clear, as comparisons between the best cheapo models are hard to come by. But across all the reviews, one thing is consistent: Samsung soundbars out thump other budget soundbars. And the lower end Samsung HW-D450 is less than $300 on Amazon, and has most of the power of its big brother version. 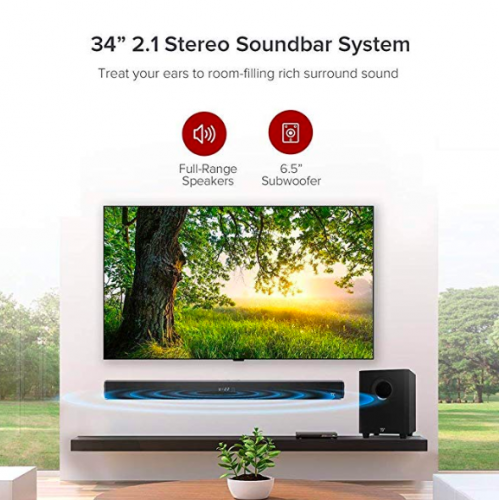 Like most low-end Soundbars, Samsung’s HW-D450 Soundbar isn’t true surround. It takes basic surround and plays it back through two channels and the wireless subwoofer it comes with. But however simple the setup is, many reviews consistently cite that competing systems sound not as good; specifically Soundbars from Sony and Vizio.

The Sony HT-C150, CNET’s top pick, has HDMI ports so you can use it as an input switcher. But the Samsung sounds better. And Vizio’s VHT510, which PC Magazine compares to the Samsung’s top end model, has two extra rear wireless speakers for true surround sound! But it has, according to recent Amazon ratings, incredibly bad reliability. (The display LEDs have been failing for months now, causing people to have to ship the entire things back to Vizio. Nobody likes mailing things!)
The Samsung has one drawback: It has spartan inputs, limited to audio. (It has two optical ports, a minijack for portable music players, and a set of RCA analog inputs.) At first, I thought this sucked. I wanted to be able to use the soundbar as a receiver, switching between my XBox, Playstation and other HDMI video sources on it. But then I realized that most modern TVs have optical audio outputs and plenty of HDMI inputs themselves, so it makes more sense to run your video directly to your TV and run your sound from your TV out to the soundbar, if you can. If not, the higher end Samsung HW-D550 has more inputs, including two mini-hdmi ports, and costs only about $50 more.

Soundbar With Most Boom Per Buck
View on Amazon