For anyone that appreciates design, this is a coupling that makes the pulse race. B&O’s achingly stylish products share an aesthetic with Apple’s own gear, so it’s fitting that they are together at last in this sophisticated-looking sound system.

Overpriced? Yes, but the BeoSound 8 looks and sounds simply gorgeous

For anyone that appreciates design, this is a coupling that makes the pulse race. B&O’s achingly stylish products share an aesthetic with Apple’s own gear, so it’s fitting that they are together at last in this sophisticated-looking sound system. 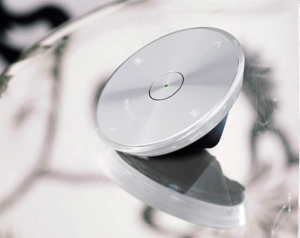 Minimalism is the name of the game here and the BeoSound 8 has an interface almost as elementary as the Apple iPad itself. Track forward and back, source select and volume are all you need for everyday use, so that’s all you’ll find on the central dial. The way the circular remote control replicates this precisely is a nice touch.

The distinctive outer circles are of course the stereo speakers, but behind the interchangeable grills (six colours are available, including yellow and purple) are a total of four drivers in a two-way design driven by 10W digital amplifiers. The conical shape of the speaker housings reduces the perceived bulk of the system, but it also prevents standing waves from building up behind the drivers.

Behind a plastic flap at the rear are USB and minijack inputs if you don’t mind ruining the minimalist design by plugging in a non-Apple device. Other than that, there are few additional features. Given the asking price, it’s surprising that B&O didn’t hang on for Apple to launch its wireless Airplay feature and include that. As it is, there is no wireless option here.

Instead, the emphasis is on sound quality and the sky-high production value translates into a crisp and dynamic performance. The wide speakers radiate a deliciously detailed treble and an agile bass far and wide into the room. It’s an open and expressive sound that works particularly well with classical and acoustic music. There’s also ample extension in the bass and that lends an ambience and authority to movie soundtracks too.

And thanks to a little switch that alters the sound mode between three settings, the BeoSound 8 works just as well freestanding on its own metal and rubber legs as it does mounted on the wall or pushed back into a corner. It doesn’t have the deep resonant bass and epic scale that the B&O Zeppelin commands, but the sound is just as sweet.

It’s a shame there’s no wireless connectivity to help justify that price tag and we have to say the B&W Zeppelin sounds bigger and better than this. That said, this is one stylish iPad dock that’s sure to impress your friends. It could also become a design classic like so many of B&O’s wonderful creations.

The BEST Portable Vaporizers for 2023