Are Women Meaner Than Men? 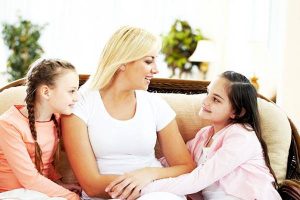 When my teenager was a toddler, the rules for the mothers of daughters were fairly simple: Raise your girls to be strong and independent. By your own example, teach them to be respectful and to demand respect in return. And above all, tell them there are no limits to their aspirations in life, at least none based on gender alone. Ten years later, as my second daughter nears adolescence, “mean girls” are the icons of her generation, glaring examples of empowerment gone wrong. These teen vipers, and their desperate-housewife mothers, suddenly require a new set of rules, starting with the adage of their mothers’ mothers: If you can’t say something nice, don’t say anything at all. What happened? For the past few years, warnings about young female bullies and their poisonous wiles have been blasted from best-selling books like Rosalind Wiseman’s Queen Bees and Wannabes: Helping Your Daughter Survive Cliques, Gossip, Boyfriends, and Other Realities of Adolescence (Crown) and Rachel Simmons’ Odd Girl Out: The Hidden Culture of Aggression in Girls (Harvest Books). A new book out last month adds another age group to the phenomenon: Mean Girls Grown Up: Adult Women Who Are Still Queen Bees, Middle Bees, and Afraid-to-Bees (Wiley). It tells us that girls don’t necessarily outgrow the habit of aggressive whining, conniving, and backbiting. Instead, says author Cheryl Dellasega, PhD, GNP, associate professor of humanities at Penn State College of Medicine, they hone these toxic skills as they get older, wreaking havoc on their sisters in every nook and cranny of other-wise polite society. “I would say that women—every woman—understands what this is,” Dellasega says. Well, I understand it—and I don’t. I am familiar with jealousy, anger, disappointment, and sadness, and with the unpleasant ways these feelings can be expressed. But is this behavior really a chick thing? As female stereotypes go, this one is pretty impressive. Unfortunately, the research behind Dellasega’s call to arms is not. She specifically solicited stories to support her hunch that female bullying doesn’t end after high school, and that’s what she got. Unnamed women describe two-faced bullying (by Queen Bees) made worse by gossipy pot-stirrers (Middle Bees) and ultimately suffered, in silence, by intended victims (Afraid- to-Bees). The steady downpour of grief leads to the claim that this is typical behavior that occurs everywhere—even, Dellasega reports somewhat breathlessly, in women’s rights organizations. Granted, it is easy to see a world populated by female bullies if you are working with accounts of females bullying. But does that make it true?

Differences by gender in hidden aggression among adults

I asked Dr. Kaj Bjorkqvist, a social sciences researcher at the Abo Akademi University in Vasa, Finland, who has studied aggression, specifically female aggression, for more than a decade. In 1994, he and two colleagues published a study called “Sex Differences in Covert Aggression Among Adults.” They reported that women were no more aggressive than men, and that indirect aggression was a tactic used by both sexes. “Adults try to conceal their interpersonal aggression as much as possible in behavior that is ostensibly rational and seems to contain no aggression at all,” they added.

Men and women rely on various types of hidden aggression

People of both sexes tend to be more hostile toward members of the same sex, according to the study, but men and women rely on different brands of covert aggression. Women use social manipulation—which includes insulting comments, negative glances, silent treatment, and backbiting—more than men do. And men favor “rational-appearing aggression,” a medley of interrupting, criticism, and questioning of a victim’s sense of judgment, which can be subtle and a lot harder to pin on the bully but no less wounding. All covert bullying, Bjorkqvist says, “is part of human behavior. It is in the biology.” So where are the books about mean men? “Everybody takes it for granted that men can be mean,” he explains. “We are hearing more about women, not because they are meaner, but because we are looking at it for the first time.”

It only makes sense that if men use a better-disguised form of bullying, women are going to be more easily busted for aggressive behavior. And if people are most aggressive with their own genders, women are going to have stories about female bullies. Unfortunately, a book that uses those differences to reveal a new vein of nastiness in the female gender profile is bound to be a big hit. What better way to tap into feminism fatigue than to produce evidence of the dangerous by-products? No doubt, Mean Girls Grown Up will be used to validate the position that women have abused the privileges of their new empowerment and need to back off and be nice.

We should all try to be kind

So what do we tell our daughters? Smile, comply, and quietly accept pay of about 76 cents for every dollar earned by a man, or risk being called an adult bully? As humans, we must all try to be gracious, but as women we can’t be paralyzed by faulty generalizations that distract from real grievances—even if they do appear on the best-seller list. I don’t know about you, but persistent inequity makes me cranky. And despite the unappealing spectacle of my anger, I plan to stay that way.

Reese Witherspoon Gets Ready for Her Wedding